Activated carbon has been used as an adsorbent for centuries. Early uses of carbon were reported for water filtration and for sugar solution purification. Activated carbons ability to remove a large variety of compounds from contaminated waters has led to its increased use in the last thirty years. Recent changes in water discharge standards regarding toxic pollutants has placed additional emphasis on this technology.

The specific capacity of a granular activated carbon to adsorb organic compounds is related to: molecular surface attraction, the total surface area available per unit weight of carbon, and the concentration of contaminants in the wastewater stream.

An adsorption isotherm is the basic instrument in evaluating activated carbon use. The isotherm represents an empirical relationship between the amount of contaminant adsorbed per unit weight of carbon and its equilibrium water concentration

This relationship can be expressed in the form:
X/M = KC1/n

The constants K and n are determined by plotting experimental results on log-log paper with the concentration of contaminant on the X axis and the amount of contaminant adsorbed on the y axis. The slope of the line developed is equal to 1/n and the intercept equal to K. These dimensionless, empirical constants are useful for comparing the adsorption capacities for different compounds or for assessing the adsorption capacities of various activated carbons.

As a contaminated water stream passes through a confined bed of activated carbon, a dynamic condition develops which establishes a mass transfer zone. This “mass transfer zone” is defined as the carbon bed depth required to reduce the contaminant concentration from the initial to the final level, at a given flow rate. (Figure II)

As the mass transfer zone moves through a carbon bed and reaches its exit boundary, contamination begins to show in the effluent. This condition is classified as “breakthrough” and the amount of material adsorbed is considered the breakthrough capacity. If the bed continues to be exposed to the water stream, the mass transfer zone will pass completely through the bed and the effluent contaminant level will equal the influent. At that point, saturation capacity is reached. The saturated capacity is that which is represented by the isotherm.

To take full advantage of the adsorption capacity difference between breakthrough and saturation, several carbon beds are often operated in series. This allows the mass transfer zone to pass completely through the first bed prior to its removal from service. Effluent quality is maintained by the subsequent beds in the series.

When sizing an activated carbon system, it is necessary to choose an appropriate contact time for the wastewater and the carbon. EBCT (empty bed contact time) is the terminology used to describe this parameter. EBCT is defined as the total volume of the activated carbon bed divided by the liquid flow rate and is usually expressed in minutes.

The appropriate EBCT for a particular application is related to the rate of adsorption for the organic compound to be removed. While this rate will vary for individual applications, experience has shown that for most low concentration dissolved organics an EBCT contact time of 10 to 15 minutes is normally adequate.

Carbon adsorption is an extremely versatile technology. For many water treatment applications it has proved to be the least expensive treatment option. Adsorption is particularly effective in treating low concentration waste streams and in meeting stringent treatment levels.

One of the major attributes of activated carbon treatment is its ability to remove a wide variety of toxic organic compounds to non-detectable levels (99.99%). Its suitability on a specific application will normally depend on costs as they relate to the amount of carbon consumed. 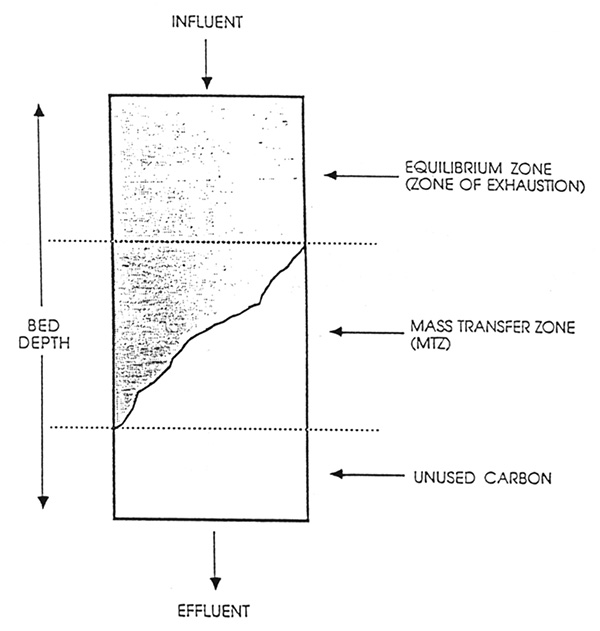 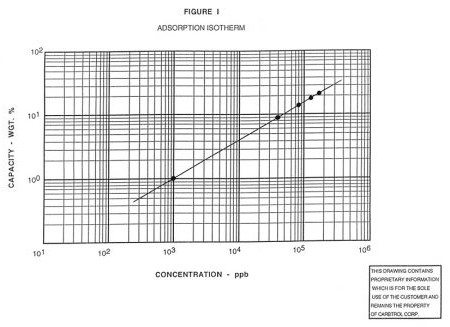 © 2023. Carbtrol. All Rights Reserved
Facebook Linkedin
Manufactured in the USA