Two Stage Treatment Technology for Per- and Polyfluoroalkyl Substances – PFAS

PFAS chemicals are a class of fluorinated chemicals that have been used for decades in nonstick cookware, stain resistant fabrics, cosmetics, and fire retardant applications. They are particularly effective as they resist grease, water and oil and are especially fire and flame resistant. Over 4000 chemicals have been identified in this class, most of which are found to break down very slowly in the environment.

Because of their widespread use and environmental persistence, many PFAS compounds have entered the food chain and are found widely dispersed in air, water, and soils. Studies have linked these compounds to harmful effects in both animals and humans. Of particular concern is the impact of these chemicals on the aquatic environment, including groundwater, surface waters, and in particular drinking waters.

Several treatment technologies have been shown to be effective in treating PFAS contaminated waters.

Due the varying chemical composition of the compounds, in this class, however, no one technology has been shown to effectively address the full range of PFAS chemicals.

Activated Carbon Adsorption and Ion Exchange Technologies have both been used effectively to address specific PFAS water contamination problems. Activated Carbon has been shown to be particularly effective for treatment of long chain, high molecular weight PFAS compounds. Laboratory and field applications have shown effective removal to the low part per trillion levels. However the adsorption capacity of activated carbon for some lower molecular weight PFAS compounds is somewhat limited and operating to a low part per trillion treatment objective, can result in rapid exhaustion of the carbon and high media usage rates.

A second technology, Ion Exchange, has also proven effective for PFAS treatment. The exchange media, while considerably more expensive than the activated carbon media, has been demonstrated to be cost effective specifically for low molecular weight PFAS compounds.

Additionally, in most PFAS treatment applications, some level of non-target background organic contamination is present. In the two stage process the activated carbon can be used to address removal of the background material further maximizing the cost efficiency of the polishing treatment step. 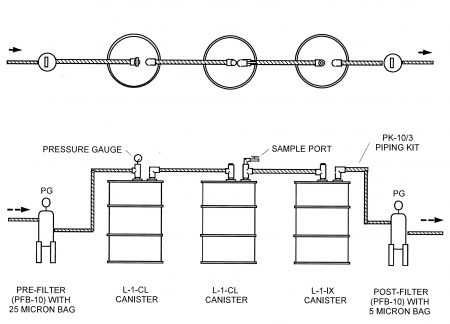 Figure 1 depicts a flow diagram of the two stage process. The activated carbon stage (two drums in series) is sized with an approximate ten minute empty bed contact time. The second stage ion exchange contactor (single drum) is then sized with a 4 minute contact time. Further optimization can be obtained with an additional vessel on the first and/or second stages. Each stage can then be operated in a countercurrent manner optimizing media usage by removing the first vessel in the stage (when spent) and adding a fresh vessel as the last vessel in the stage. Note that the addition of extra vessels may require the use of high pressure canisters or additional pumping steps.

Typically, PFAS application treatment objectives are in the low part per trillion levels so it is important to insure removal of any particulate matter in the treatment stream. Normally pre and post filtration is added to the treatment train to prevent any contaminated particulate from showing up in the treated effluent and affecting the results.

© 2022. Carbtrol. All Rights Reserved
Facebook Linkedin
Manufactured in the USA